Our dear friend and brother, Yeshi Reinhardt, the Founder and Director of Hands of Mercy, went to Glory on Thursday morning in New Jersey while in preparation for a conference there and another summer-long speaking tour in the USA.

The Hands of Mercy team are devastated and heartbroken due to the sudden and unexpected loss of our Founder and Director, "the heart and soul" of our organisation. We are determined to continue the wonderful work Yeshi has started and to keep his legacy alive, relying on the strength, grace and wisdom of our L-RD.

Yeshi served the US during the Vietnam War, an experience that marked him in many ways for the rest of his life. As a war veteran, he has shown an example to us all through his strength in overcoming personal trauma, trial, and suffering and his determination in turning the tragedies he has experienced into strength for doing good. Instead of living a life of victimhood, he chose to work tirelessly to help those who experienced similar traumas of war that he went through.

Yeshi lived his life like there was NO tomorrow, putting 110% of himself in every situation. A single man for his entire life, Hands of Mercy was his “child” in which to do good and leave a legacy of purpose. He put all he had in it. After nearly 30 years of running a successful charity, he was still sleeping in his office — the bomb shelter of the crowded and modest charity headquarters in Sderot.

Yeshi didn't know life apart from work and only rested on the weekly Holy Shabbat. Due to his high workload and the pressures of running a charity on the front lines and living under relentless rocket fire from the Gaza strip, Yeshi was planning to retire and he has appointed a new director and successor before he went on his yearly speaking tour in the US.

Yeshi has travelled to the US with joy and peace in his heart, looking forward to starting his yearly speaking tour and his approaching well-deserved retirement in this beautiful "Promised Land" of pain and redemption. His team at the Hands of Mercy headquarters were shocked and heartbroken to learn that he will never return to his precious "Covenant Land" and the people he so loved.

Through our pain and heartache, we thank God for Yeshi’s life, legacy and obedience, as he is now blessed with a “final” rest in which he connects with his Father and Creator and he no longer has to gear for another week of trauma and pressure that started for him at the end of each Shabbat. Despite our own indescribable loss and sorrow, we rejoice in knowing that Yeshi now experiences a full and eternal Shabbat rest with his beloved L-RD.

We THANK-YOU so much for your love, faithful prayers and support for Hands of Mercy through this painful and challenging time... enabling us to continue Yeshi's work and uphold his wonderful legacy. Forever Grateful... Yariv Goldman and the 'Hands of Mercy' team

P.S. We will keep you updated on Facebook about the date and place of Yeshi's funeral in Grand Rapids, Michigan, US, and his memorial service in Israel. There was also a memorial ceremony in Sderot, the city he loved so much, on the 30th of June.

Living under fire in southern Israel in the past 24 hours 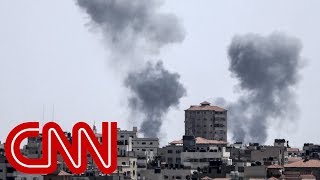 Video: Israel responds to Gaza fire with dozens of airstrikes

Threats of invasion against Northern Israel